It's November and probably the official start of the panicking about the holidays season. Various retailers would have me believe said panicking should start in September and generally for knitters, panicking for next year starts somewhere between December 26-January 1. Presently though, there is belief is there that all deadlines can be met and those piles of knitwear planned for accomplishment in the next seven weeks (six really, one must plan to mail things too) will be completed. Also the sixteen other project that have been laying around waiting for my attention for the past couple of months.

It's not a heavy knitting year at Chez Hedgehog. I have 2 Loopy Academy projects to finish--one of which will probably double as a Christmas gift; a couple of baby presents to be thinking about; some requests that need to be skeined up and started.

Still, I need to be knitting a fair deal faster than I have been for the rest of the year if I'm going to make deadlines.  Which means less playing of Farm Heroes Saga on the train to and from work and more knitting from a chart and relistening to Terry Pratchett books for the umpteenth time.

I probably should go pull at least some yarn out and see what it is I'm planning to knit up. This weekend I've been browsing through patterns for gloves/mittens/mitts and that's been horrendous for the queue. I'll make EVERYONE I have ever met fingerless gloves, right? Uh huh, sure I will.  At least one pair will be out of sport weight or DK yarn, there's just not time otherwise.

Of course, it doesn't help to have a clingy gray lapcat every time I sit down with my knitting. She's a particular barrier, no one really wants to neglect the little cat with her big green hopeful eyes but at the same time, when she's sitting on the needles things get a little challenging.  Might work better if I would go and knit on the couch or bed, where it's easier for her to be a sidecat rather than a lapcat. We used to be good at that, she and I.  Watched a lot of TV in Wisconsin that way.  Hopefully a few knitting marathons will set us on the right path again.

What are you knitting for Christmas this year?

Leave me a message! (Blogger doesn't give me your email address so if you'd like an answer, please see my About Me page for my email address)

Remember when I was knitting so much and particularly so many pairs of socks that I had to dedicate an entire day just to sock knitting on ... 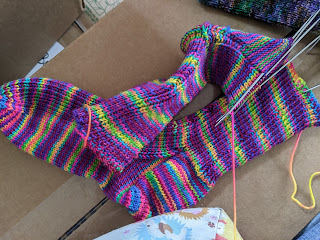